The book collection can be divided into three main categories: How-To, Where & Who Books

First, there are HOW-TO books. Some are general, and others are specific, for example how to research immigration records, or how to do research in Poland.

Second, there are WHERE books: where to get vital records, or where to find information about a specific family. These books are largely lists.

Third, there are WHO books. These include vital records, family genealogies, etc. These are the books which might have actual information about your family.

Our collection in this category is primarily of a local nature. There is, of course, some overlap in these categories. There is usually some WHERE information in the HOW TO books. There are also a number of journals. They are listed separately.

IV. WHERE BOOKS
See also L.D.S. catalog on microfiche and PERSI on CD-ROMType your paragraph here.

How To books: Locality

How To books: Record type

How To books: General

A Guide to Genealogical Resources at

International Genealogical Index (IGI) created by Latter Day Saints. Contains births and marriages sent in by church members and others. References can be checked with some difficulty.

Ashley of the Old Colony, Vol. 1, by Rogert H. Ashley, 1981
Recollections of Lewis Bonnet, Jr. (1778-1850), 1991
Mayflower Families Through Five Generations: Vol. I, John R. Billington Bishop and Burroughs
Families in Early Massachusetts by Evelyn C. Lane, 1991 (paper)
History of Richard Bourn and some of his Descendants by Hannah S. Dykes 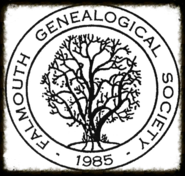